On Sundays in August, we explored Jesus’ declaration “I am the Bread of Life” from the Gospel of John. Curiously, we found that the more Jesus asserted that he is the Bread of Life, and having come down from Heaven, the more urgent the opposition to his teaching became. The chief priests and the teachers of the law found his comparison of himself to the provision of manna in the wilderness bordering on blasphemous. As the discussion went on, even his disciples begin to question, saying “This teaching is difficult, who can accept it?”

The disciples, who had witnessed the miraculous feeding of 5,000 from a few loaves, could not accept Jesus’ comparison of himself with that heaven-sent miracle of manna. In response Jesus asks “Do you also wish to go away?”

Jesus offered himself to be miraculously created, broken, and shared to the nourishment of the whole world, and the disciples found teaching “too difficult.” I wonder if the issues are not sacrifice and miracle, but a more personal and more complicated truth. If Jesus offers himself to be broken and shared, what does that mean for those who follow him? What is our role in feeding, caring for, and saving the world?

Saturday marks the twentieth anniversary of the attacks of 9/11/01. The Reverend Gay Silver, who preached and worshipped at All Saints’, served as the assistant for children’s ministry at Trinity Wall Street (located across the street from the Twin Towers) at the time of the attack. She had to evacuate the child care center and ensure that the children and staff got to safety. The Reverend Milton Williams, now rector of St. Andrew’s, Greensboro, was also on staff at the church which was hosting the Archbishop of Wales that morning. I was serving a congregation in suburban Connecticut and many of our parishioners commuted to New York City.  Ordinary people were going about their workday when their lives were changed forever. As we know, some 3,000 in New York never returned home that day.

After the attack, historic St. Paul’s Chapel, located across the street from the rubble of the World Trade Center towers, was incredibly untouched–not even a one pane of glass had been broken. At the time, the chapel was more of a museum than a church, holding a few sparsely attended worship services each month. As one of the few undamaged buildings in the area, it soon became a round the clock center for relief efforts, serving thousands of meals, offering space for prayer supported by area clergy, pews for badly needed sleep and practical items like replacement shoes for search and rescue workers when their own melted on the hot iron. This went on for more than nine months, day after day, hour after hour, until the last piece was cleared from the site. Those who served at St. Paul’s Chapel faced into the worst humanity was capable of, and in that space, became the Bread of Life, a living witness to hope.

Talking to those who served in the chapel, I know that there were many days they simply would have liked to “go away.” It was “too difficult,” too raw, or too hopeless. But they were well aware those thrust into that horror had not had a choice either, and so they stayed. The moribund chapel became a vibrant faith community, a transformation which continues to this day.  People who come to St. Paul’s Chapel do not to gaze at a dusty history. They encounter the living God in the present.

Our own work may not have the shattering headlines of 9/11, but as Christians, we are continually called to be blessed, broken, and shared in order to accomplish God’s saving work in this world.  In our lives, there may be days when hope is difficult to find, opposition hard to overcome and questions far outnumber answers. In those times, we remember Jesus’ story doesn’t end at the cross, and neither does ours. God’s saving grace will not be deterred. The Bread of Life continues to nourish us in hope if we but open our hand to receive. 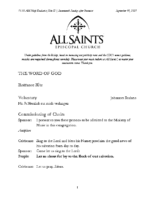 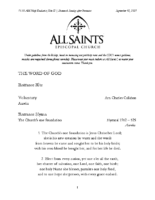