A few of us were disappointed when CBS recently decided not to renew the TV series “God Friended Me.” The show’s story line revolved around a young man, Miles, an avowed atheist, whose father happened to be an Episcopal priest. Miles produced a pod series called “The Millennial Prophet,” in which he expounded his atheistic views over the Internet.

As he went about his daily routine, Miles suddenly received a strange “friend request” on his Facebook Page — from none other than “God.”  Although he originally thought it was some kind of a hoax, he finally accepted God’s Facebook friendship. “God” in turn gave him some additional friend requests – people whom he discovered were in trouble or in a desperate situation. Miles accepted these friend requests. Aided by his friends, Kara and Rakesh, he helped the person in need, although not necessarily the way he wanted. Each “friend” encounter was an opportunity for Miles to realize that there was someone he didn’t know (i.e., “God”) working behind the scenes to enable Miles and friends to remedy a seemingly hopeless situation. In the final episode of the series, Miles was moved to visit his father’s former church to pray for his sister’s healing following a post-surgery setback. The final episode left us with a few questions, such as whether or not Miles’ faith was rekindled after his sister’s amazing recovery.

In this time of pandemic, I wonder if our faith in our loving God is being tested. Unlike Miles in “God Friended Me,” we might say that we still believe in God. However, the lifestyle changes that this pandemic is causing, combined with continuing violence against people of color and public safety officers, and the increasing polarity in our nation’s politics, might challenge our belief in a God who, through Jesus, “saves” us. However, our faith tells us that God is ALWAYS with us, even in those moments where we feel that He’s a million miles away. God is always loving us and the world that He created. God is working through doctors, nurses, first responders, and other health professionals to help heal those who are afflicted with Covid-19.  God is also working through scientists, who are developing a vaccine against this deadly illness. And still others, with God’s help, are working for a lasting cure. There are also very personal life-saving stories.  A recent article in our local paper told about an Episcopal priest from Texas, who recovered from Covid-19 and offered to donate some of his plasma to someone who was dying from the disease. The priest’s antibody-laden plasma was able to bring that person to a full recovery!

Even though the TV series “God Friended Me” is over, God really does “friend” us!  Because of Jesus and the Holy Spirit, we know that our awesome God is fully accessible to us. Since God loves us so much, God will never leave us. God is always there for us, even if we feel that He’s not here. Please look for people around you in need and reach out to them. Like Miles, you’ll see an image of God at work through you! But unlike Miles, God continues to work through you and me, each and every day. So, believe — and act on that belief! You’ll be glad you did! 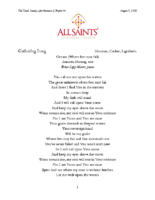