On Tuesday, in addition to tackling the regular agenda, your vestry took time to reflect on the seeming uptick in impatience, demanding aggressive behavior, and violence towards others.

“People just seem to be more angry and short-tempered,” observed one vestry member. “They don’t even know what they are feeling,” observed another. And a third noted that there is a fifty percent increase in female suicides.

The conversation was sparked by the killing on Monday of a supermarket cashier in Georgia after she asked a customer to raise his face mask.

Vestry members are right. Violence does seem to be increasing. Last month, a Southwest Airlines flight attendant had two teeth knocked out by a passenger on May 23, allegedly over a request to put on a seatbelt and raise her tray table. There were 477 incidents of misconduct by Southwest passengers between April 8 and May 15 alone, with more than 2,500 incidents reported by the Federal Aviation Administration so far in 2021, according to the Fort Worth Star-Telegram on May 25, 2021.

Through the first five months of 2021, gunfire killed more than 8,100 people in the United States, 14 more deaths per day than the average total during the same period of the previous six years. This number of casualties exceeds those of the first five months of 2020, which was the deadliest year of gun violence in at least two decades (Washington Post, June 14, 2021).

As violence goes up, so does fear. When people are afraid, they are unable to think well, which increases the likelihood of extreme responses.

How can Christians respond? What are the resources of our faith?

We always begin with prayer. Jesus’ instructions to his disciples to “pray like this” included prayers for God’s will to be done, for the resources to meet the challenges of the day, for forgiveness, and for the strength to resist temptation. Pray for our world, our nation, our leaders, for our communities, our families, and our own daily bread.

Reflect. Seeing the face of Jesus in one another means seeing Jesus in the one who asks you to comply with regulations and instructions that may be annoying but are certainly not the “fault” of the one charged to carry the message. When you are exasperated or angry, breathe, and ask God to show you the face of Jesus in that person.

And act. Pent up grief and frustrations, fears of losing jobs and homes, inequality, and inability to access basic resources of food and healthcare, all of these contribute to a sense of powerless that may cause people to resort to violence.

What is the part of creation that you are charged with taking care of? Where is God asking you to make a difference? The powers and principalities tell us we are helpless in the face of these forces; the Gospel, the good news of Jesus proclaims otherwise. We are the ones whom God has chosen to work through in this world, and in the power of the Holy Spirit, we have all we need to do what we have been called to accomplish. 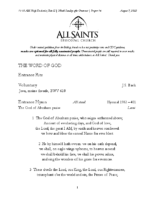