This weekend we celebrate Memorial Day, originally known as “Decoration Day,” growing out of various observations following the Civil War, and only becoming an official federal holiday in 1971.

When my grandmother was young, she and her family would go each year to lay flowers at the graves of those who had died in the war. As a young adult, that day took on added significance when her brother was killed in Vanuatu (a mountainous island in the South Pacific) during World War II. Some of you know that his body was only recovered in 2012.

For me as a child with a serving parent (my father was a submariner for twenty-seven years), Memorial Day was a clear and present reminder that his was not an ordinary job. The Vietnam War was at its height. My playmates had lost parents. Base ceremonies on this day made “gone, but not forgotten” more than a slogan.

My children, band members in middle and high school, remember Memorial Day as one which required them to rise early, ready to march in two parades (one in each of the “sending” towns). There was a festival atmosphere from townspeople lining the streets, but speeches from serving and formerly serving members made real the human cost of the wars in Iraq and Afganistan they only heard about in scattered news reports.

The Hebrew prophets Micah and Isaiah were well acquainted with the human cost of war. They cast a vision of the reign of God’s peace where people “shall beat their swords into plowshares and their spears into pruning hooks; nation shall not lift up sword against nation, neither shall they learn war anymore.” Their vision longs for a time when Memorial Day would not see new names added to litany of those who have died. Making that vision a reality is our work.

On this Memorial Day, I invite each of you to pause and remember those who have given their lives in service of this country, to pray for their families who live with the absence created by their death, and in their honor commit yourself to the hard work of peacemaking, beginning in your heart and with your family. 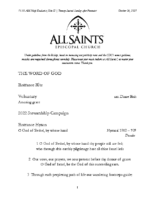 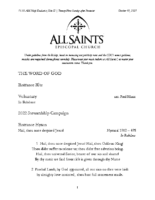 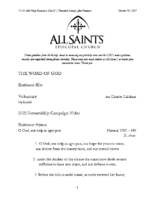