Given in honor of Henry and Betty Wiley by The Reverend Bob and Donna Sessum, October 2019. Biography can be found at the bottom of this page.

Description:  A tall rounded crown tree or a shrub, this tree can grow to 70 feet. There is much debate about the name, but as characteristics vary from region to region, both names have persisted.

Leaves: These are 1.5-4 inches long or larger. They are oblong and variable shape. They have a rounded tip and are slightly lobed, three lobes are common as is a wavy lobe. The underneath side is grey-green and has star shaped hairs. Top side is shiny dark green.

Habitat: It will grow in various soils (including limestone) and in hardwood forests. It can be found from North Carolina to Florida, generally in the southeast and north to southern Oklahoma west to Texas.

Uses: It is a larval host for the dusky winged and hairstreak butterflies.

History: It was named for Elias Magloire Duran (1794-1873) who was a pharmacist and botanist from Philadelphia. He was in the medical corps of Napoleon’s army until 1814 and studied botany intensely for two years. Moving to America, he collected over 10,000 species of North American plants over 40 years.

Henry and Betty Wiley are major pillars of All Saints’.  For over a decade during the 1980’s, they were the advisors of the youth group.  Admired by the youth as their adult leaders, many activities and adventures were experienced including the annual beach and skiing trips, and the pancake and spaghetti dinners.  Betty was the kitchen mastermind. The gals adored Henry and boys knew Betty was there in their best interest.  Henry served as property manager, even when Senior Warden, and at each Old Countrie Fair he guarded the property while cooking the pig for delicious BBQ.

Both served on the Vestry and were always available to give of their time and talent without hesitation. Even in the 1990s and into 2000s, this couple continued to be pillars of the congregation.  Thanks to them for their servanthood in God’s ministry at All Saints’ Episcopal Church. 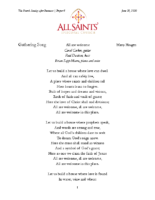