The following was presented by Nancy and Joe Hunter and Janes Liles during services on June 24, 2018.

We want to thank each of you for your participation in our Capital Campaign.  Because of YOU, your belief in this mission, you have freed us to serve in ways we have not even imagined. We want to share some numbers with you:

In May 2018 a miracle happened at All Saints’.  You gave.  Former parishioners gave. Our kids gave, people who do attend and some who have NEVER been to All Saints’ gave.  You gave up a cup of coffee a week at Starbucks to give.  You gave up travel plans to give.  You gave up eating out an extra night to give.  You dug in your pockets, looked under the couch cushions, and checked the car seats to give. You gave your time, your prayers, your energy, your support, and your talent.  You gave everything you had, then found a way to give more, pray harder, bring one more side dish, and host one more meeting. Not only did we raise what we needed, we raised MORE than we needed.

Aside from pledges and one time gifts, we had been moving $1000 every month from the building fund which was the remainder of an earlier capital campaign, to help offset the debt.  All of that has been put against the principal.  The Vestry also voted to create a Capital Reserve account to hold any money in excess of, but that may not be needed for debt reduction.  This money will be used for future capital needs and to cover deferred maintenance.

The Resurrection Choir sang Hillsong’s New Wine on Pentecost Sunday.  It is so appropriate for this transformation so we would like to offer it as a prayer. 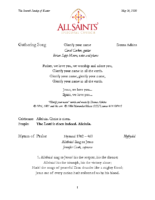